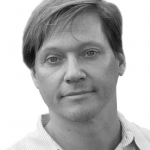 Illya Azaroff, FAIA is the founding principal of +LAB architect whose mission is to build resilient capacity and advance goals for a sustainable, regenerative future while giving underserved communities greater voice and visibility. He is an internationally recognized leader in disaster mitigation, resilient planning, and design strategies. An Associate professor at New York City of Technology (CUNY). He serves as a technical expert for the New York Climate Impact Assessment appointed by Governor Hochul.  As AIA New York state disaster coordinator, he founded the AIA Unified Task Force City and State addressing impacts of COVID19.  Illya is advising HUD, the federal government, as part of the Resilient Housing Task force. While with ICC/ANCR- the Alliance for National Community Resilience helped create community resilience benchmarking system. He is a founding director of KIGRR - Kalinago Institute for Global Resilience and Regeneration on the island of Dominica. His office is advancing culturally significant community resilience hubs and regenerative cluster housing in several communities across the world. He served as the 2021 AIA New York State president and founding co-chair DfRR Design for Risk and Reconstruction at AIA New York (2011-21). Prior to coming to New York, he worked in Germany, Italy and Holland. He has worked in the field for over 25 years.