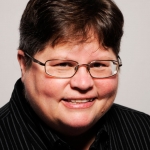 Tracy Baim is publisher and executive editor at Windy City Times, a weekly LGBTQ newspaper which she co-founded in 1985. Baim is the founder of the Pride Action Tank, which hosted a summit on tiny homes for the homeless in 2016 and co-hosted a tiny homes design competition the same year. Baim received the 2013 Chicago Headline Club Lifetime Achievement Award for her 30 years in journalism. In 2014, she was inducted into the National Lesbian and Gay Journalists Association Hall of Fame. She has won numerous gay community and journalism honors, including the Community Media Workshop’s Studs Terkel Award in 2005 and several Peter Lisagor journalism awards. Baim’s most recent book is Barbara Gittings: Gay Pioneer. Her other books include Gay Press, Gay Power: The Growth of LGBT Community Newspapers in America; Obama and the Gays: A Political Marriage; and Out and Proud in Chicago. Baim was executive producer of the lesbian film Hannah Free, starring Sharon Gless, and Scrooge & Marley. She is creator of That's So Gay!, an LGBT trivia game. She was also co-vice chair of Gay Games VII in Chicago, and in 2013 was founder of the March on Springfield for Marriage Equality.