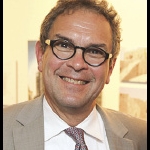 Rick Bell, FAIA, serves as Executive Director of Design and Contruction Excellence for the City of New York's Department of Design and Construction. He is the former Executive Director of AIA New York where he was instrumental in the creation of the Fit City and Fit Nation programs. At AIANY, Rick created the storefront Center for Architecture, which has hosted 1,000 public events and 20 exhibitions each year since opening its doors in 2003. Previously, Rick worked in the public sector as Chief Architect and Assistant Commissioner of Architecture & Engineering at New York City’s public works agency, the Department of Design & Construction. With experience in the private sector in New York, France and Switzerland, he is currently a registered architect in New York and New Jersey and was elevated to Fellowship in the AIA in 2000 for his work in public facility design.

Rick holds degrees from Yale and Columbia and has received numerous awards for civic activities and design, including designation at a Chevalier dans l’Ordre des Arts et des Lettres by the French Ministry of Culture and the Kemper Award from the American Institute of Architects at the 2014 Convention in Chicago. He is a Fellow of the Royal Society of the Arts in London and of the Forum for Urban Design and the Institute for Urban Design in New York. Recent publications include essays in Beyond Zuccotti Park published by New Village Press and NY&LA: The Uncertain Future from Oxford University Press.