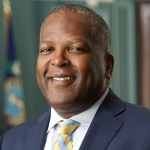 Since being elected mayor in a record turnout election in April 2010, Mayor Steve Benjamin has made it his mission to create in Columbia, SC, the most talented, educated, and entrepreneurial city in America. In addition to serving as Mayor of Columbia, Mayor Benjamin also served as the 2018-2019 President of the U.S. Conference of Mayors and as Chairman for Municipal Bonds for America, Member of the Federal Communications Commission’s Intergovernmental Advisory Committee, Member of the Accelerator for America Advisory Council and Co-Chair of the Mayors for 100% Clean Energy campaign.