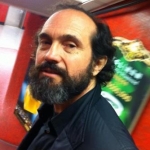 Pablo Castro was born and first educated in San Juan, Argentina and later at Columbia University in New York. He is a licensed architect in New York, Connecticut, and Argentina. His design direction at OBRA Architects has garnered six AIA NY Design Awards, two 2004 Chicago Athenaeum American Architecture Awards and the 2014 Kim Swoo Geun Preview Prize, Seoul. He is a 2012 Rome Fellow of the American Academy of Rome, 2006 NYFA Fellow in Architecture/Environmental Structures and a 2003 Society of Architectural Historians de Montëquin Senior Fellow. He spoke in MoMA’s 2007 Conversations with Contemporary Artists and has lectured across the globe, at Korea National University of Arts, Tsinghua, RISD, Columbia, Cranbrook, ETSAM, Roma Tre, among others. OBRA is one of 2005 Architectural League Emerging Voices, the 2006 winner of the PS1 MoMA Young Architects Program, and was included in the 2014 Venice Architecture Biennale, US Pavilion. OBRA Architects was founded by Pablo Castro and Jennifer Lee in the year 2000 in New York City. The year 2013 marked the inception of their third outpost in Seoul, following the opening of their Beijing office in 2011.

Current projects under construction include a private house and a multi-family apartment complex in San Juan, Argentina, and a 5,550m2 kindergarten for 540 Chinese children in Beijing scheduled for completion early next year.