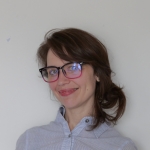 Stephanie Davidson is an assistant professor at the Ryerson School of Interior Design in Toronto, Canada. Davidson has worked for German offices sauerbruch hutton and Gonzalez Haase, as well as Montreal's Provencher Roy. Since 2008, she has collaborated with Georg Rafailidis as Davidson Rafailidis. The duo was recognized with the Emerging Voices award from the Architectural League of New York in 2018. Davidson co-authored a book on beginning design called Processes of Creating Space: An Architectural Design Workbook (Routledge, 2017). She earned a degree in fine arts from Mount Allison University, studied architecture at the Architectural Association and Dalhousie University, and earned her MArch.