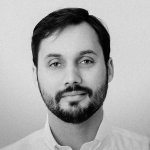 Italian architect and urban designer, Ghigo DiTommaso, a Director at Gehl, has focused his research and practice on public space design for more than a decade. Trained at the Florence School of Architecture, Ghigo began his professional trajectory in Barcelona, where he worked with Gina Architects for several years before relocating to San Francisco to join the Rebar Art & Design Studio in 2012. As a member of Rebar, Ghigo spearheaded some of the group's most ambitious urban installation projects from inception through construction. Member of the Gehl Studio San Francisco since its founding in 2014, he now leads Masterplanning and public space design projects in cities across Northern, Central, and South America. Always engaged as an educator throughout his career, Ghigo taught at Universitat Ramon Llull, University of California Berkeley, and at University of Texas at Austin. Ghigo holds a Ph.D and MS.Arch from EtsaB, Barcelona School of Architecture, a M.Arch and a B.Arch from the University of Florence.