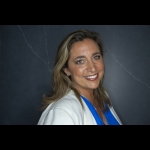 Patricia Dominguez is the Vice President of Architect and Design Sales for Cosentino North America. In this position she oversees sales for the commercial side of the company’s business and plays a very valuable role in the relationships Cosentino has with architects, designers and kitchen and bath dealers across the country. In her 11-year career with the company Dominguez has served in various roles, including Director of Public Relations, Marketing Manager and Director of Field Marketing in which she has provided leadership and direction for new color launches and spearheaded partnerships with industry organizations like the American Society of Interior Designers, the National Kitchen & Bath Association and the American Institute of Architects. Dominguez has received several accolades including the 2015 ASID Industry Partner Merit Award and the 2010 ASID Presidential Award, and currently serves on the Board of Trustees for the ASID Foundation. She is also committed to philanthropy as is evidenced through her work with Houston nonprofits Latin Women’s Initiative, Prepared 4 Life, Lemonade Day, the Junior League of Houston and the Neighborhood Centers.