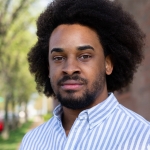 Driven by a passion for systems change and equity, David Dwight IV serves as the Executive Director and Lead Strategy Catalyst at Forward Through Ferguson (FTF), the organization created to carry on the work and vision of the Ferguson Commission, which was a wide-ranging community policy recommendation process engaging over 3,000 residents after the killing of Michael Brown Jr. In David’s role, he leads FTF, develops strategic initiatives, and directs the organization’s policy and systems advocacy strategy.

He has served in a variety of leadership roles to engage community voice and apply a Racial Equity lens to regional issues. Most recently he served as a as a member of the Vacancy Advisory Collaborative’s leadership committee and co-chair of the Community Advisory Committee for the City of St. Louis police chief search process.

David has taken root in St. Louis where he has lived for nine years. He received his degree in biomedical engineering from Washington University in St. Louis in 2015. His experience co-founding Students in Solidarity—a multi-campus student advocacy coalition—led him to center equity, justice, and advocacy in his career. After graduation, he served as the communications fellow for the Ferguson Commission where he worked closely with the Citizen-Law Enforcement Relations working group. He is dedicated to supporting St. Louis region as we forge a path toward a transformed St. Louis where racial equity is the status quo. David balances his equity work, and maintains his sanity, through theatre and dance.