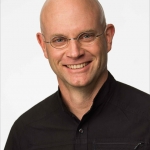 Brian C. Farling, RA, Lead Designer, Jones Studio Inc. is originally from Harrisburg Pennsylvania and has a Bachelor of Architecture from the University of Arizona (1994). Brian enjoyed working at two of Arizona’s most renowned firms, Line & Space and Architekton before joining Jones Studio in 1998. Over the past 16 years, he has been the design lead on many recognized projects including Mesa Community College Performing Arts Center, the G.S.A. Mariposa Land Port of Entry, the University of Arizona College of Architecture, Planning and Landscape Architecture, and the South Mountain Community College Performing Arts Center.

Brian is influenced by the work of Peter Zumthor, Glenn Murcutt, Lou Kahn, Richard Serra and Andy Goldsworthy. In his free time he officiates at his daughter’s swim meets and is an active member of Arizona Forward’s Water Committee. Brian practices architecture as a pragmatic art and brings a respect for the earth and belief that human ingenuity and creativity can shape our world for the better.