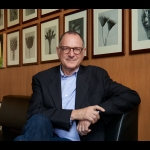 As Founding Partner of FF&P, Frederick Fisher, AIA, FAAR, is a self-described “liberal arts guy.” He is an avid reader, traveler, and arts-lover, and his approach to architecture reflects his innate intellectual curiosity and broad cultural and social perspective. His list of projects includes MoMA/PS1 in New York, The Annenberg Community Beach House, the Science Education and Research Building at Crossroads School, Hillstone Restaurant in Santa Monica, and numerous galleries, studios, and homes. FF&P recent and forthcoming projects include the City of Santa Monica Public Services Building, the Jimmy lovine and Andre Young Hall at USC, the Santa Monica City Services Building, and Vassar Inn and Institute for the Liberal Arts. Fred’s long-spanning accomplishments as a design leader were recognized in 2013 by his receipt of the American Institute of Architects, Los Angeles chapter Gold Medal. He also received the 2008 Franklin D. Israel Rome Prize in Architecture. Fred received his Bachelor of Arts degree from Oberlin College in art and art history and a Master of Architecture degree from UCLA. He was Chairman of the Environmental Design Department at Otis College of Art & Design and is currently Chairman of the Board of Governors. Fred is also a board member of the UCLA School of the Arts and the Ojai Music Festival. As founder of FFP, he directs a practice that prides itself on architecture that is responsive, realistic, responsible, and revelatory. “If you make something that brings people pleasure and fulfillment,” he says, “then you’ve done your job as an architect.”