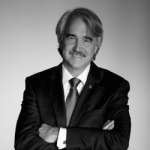 Kevin J. Flynn is executive vice president of Kiku Obata & Company, a design consultancy specializing in brands, communications and environments. The studio creates identities, publications, packaging, websites, signage, architecture and public spaces. Projects Kevin has worked on include Madrid Xanadu, the Southeast Missourian, Indiana Avenue Cultural District, City of Mt. Sterling Il., Dot Foods, and the St. Louis Art Museum. Over the last ten years, the firm has orchestrated the expansion of The Loop in St. Louis by completing eight new or historical renovation projects. The American Planning Association (APA) selected The Loop as “One of the 10 Great Streets in America” in 2007.

Kevin graduated from the University of Kansas with a Bachelor’s of Environmental Design in 1977, where he was the recipient of the Alpha Rho Chi Medal and went on to earn his Masters of Architecture from Washington University in St. Louis in 1979. Now licensed in 20 states.

He was a member of the AIA’s U.S. House of Representatives Capitol Complex Design Assessment (2008), chaired the AIA’s Committee on Leadership Education Advisory Group (2007), and served on the AIA National Board of Directors as the Central States Regional Director.

He is also active in the Illuminating Engineering Society of North America (IES); where he served as national president (2006-2007), only the second architect in the 100+ year history of the organization to hold that position.

Kevin currently serves on the University of Kansas’s School of Architecture Advisory Board.