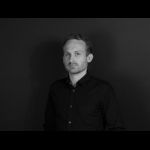 Jake Forster is an Associate at OMA, based out of the New York office. Since joining the firm in 2007, he has led a number of projects to successful completion. Jake was the Project Architect for Faena Forum, a cultural venue in Miami Beach and is currently leading a number of cultural projects as Associate in charge—the Audrey Irmas Pavilion, a multi-purpose venue for the Wilshire Boulevard Temple in Los Angeles; the New Museum expansion, a new building for the institution on Bowery, New York; and Tiffany & Co.’s Flagship on 5th Avenue, a renovation of the brand’s historic retail space in New York City. He has also collaborated with artist Taryn Simon on an installation at Park Avenue Armory.

Beyond cultural projects, Jake led the design of multiple office towers including OMA’s first tower in Tokyo for Mori Building Co., the Tenjin Business Center in Fukuoka and a competition design for a new office tower at 425 Park Avenue in New York. He has also led the concepts of large scale masterplans, including the Facebook Willow Campus masterplan in Menlo Park, California and transit hub in Toronto.