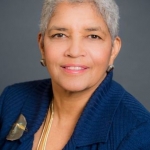 Shirley Franklin served as mayor of the City of Atlanta from 2002 to 2010. As mayor, she led the city to adopt policies and practices to stabilize finances, adopt stringent ethics legislation, and promote public engagement in government decision-making. Over the course of her two four-year terms, the city designed and implemented aggressive infrastructure plans for Hartsfield Jackson Atlanta International Airport, the Affordable Housing Opportunity Program, The Atlanta Beltline, Clean Water Plan, Parks Opportunity Program, and Homeless Opportunity Program, locally financing nearly $8 billion in development. These long-term investments boosted the local economy and expanded job opportunities for residents.

After serving as mayor, Shirley was a visiting professor at Spelman College in Atlanta and the Barbara Jordan Visiting Professor of Ethics and Political Values at the Lyndon B. Johnson School of Public Affairs at The University of Texas Austin. From 2010 to 2020 she served as executive chairman of the board of directors of the Purpose Built Communities based in Atlanta. Her service on nonprofit boards includes the National Center for Civil and Human Rights, Purpose Built Schools Atlanta, Volcker Alliance, and National Alliance for Public Charter Schools.