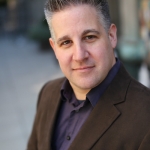 Eric Corey Freed is an award-winning architect, author, and global speaker. As Senior Vice President of Sustainability for CannonDesign, he leads the healthcare, education, and commercial teams toward better and higher performing buildings for over 15 million square feet a year. For two decades, he was Founding Principal of organicARCHITECT, a visionary design leader in biophilic and regenerative design.

His past roles include Vice President of the International Living Future Institute and Chief Community Officer of EcoDistricts, both nonprofits pushing innovative new paradigms for deep green buildings and communities.