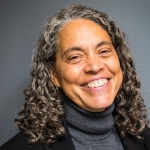 Professor of Urban Policy and Health | The New School

Mindy Thompson Fullilove, MD, LFAPA, Hon AIA, is a social psychiatrist and professor of urban policy and health at The New School. Since 1986, she has conducted research on AIDS and other epidemics of poor communities, with a special interest in the relationship between the collapse of communities and decline in health. From her research, she has published numerous articles, book chapters, and monographs. She has also written: The House of Joshua: Meditations on Family and Place, Root Shock: How Tearing Up City Neighborhoods Hurts America and What We Can Do About It, and Urban Alchemy: Restoring Joy in America’s Sorted-Out Cities. A third edition of Homeboy Came to Orange: A Story of People's Power, which she helped her father, Ernest Thompson, write, was released in May 2018 by New Village Press. She is co-author, with Hannah L. F. Cooper, of From Enforcers to Guardians: A public health primer on ending police violence, issued by Johns Hopkins University Press in January 2020. Her book, Main Street: How a City’s Heart Connects Us All, was released in October 2020 by New Village Press.