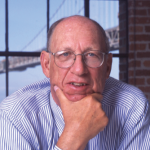 Art Gensler, FAIA, founded Gensler, the global architecture, design, planning, and strategic consulting firm in 1965. From an office of three people, the firm has grown into one of the world’s leading architecture and design groups, with 5,000 people in 46 global locations. Gensler teams provide expertise in 20 practice areas – including workplace, retail, hospitality, education, brand design, and aviation & transportation – to international clients that span a range of industries. The firm is known for their design of many iconic interior and architectural projects around the globe, such as the Shanghai Tower, which will be the second tallest building in the world when completed. The reputation Gensler has secured as a model for the architectural profession in this new century led to its being honored by the AIA as a recipient of the Architecture Firm Award in 2000. For the past 30 consecutive years, Gensler has been selected as the Most Admired Firm by industry peers.

Art is a graduate of Cornell University, which named him “Cornell Entrepreneur of the Year” in 1995. He currently serves on the Advisory Council of Cornell’s College of Architecture, Art and Planning. He has been a Visiting Professor at Cornell, the University of California at Berkeley, and Arizona State University. He is also a Trustee of the Buck Institute for Aging, the California College of the Arts, and the San Francisco Museum of Modern Art.