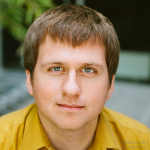 Myer Harrell is a Principal and the Director of Sustainability at Weber Thompson. He believes in the power of design to promote a sustainable future and manages the firm’s initiatives to that end. He was a member of the design team for the award-winning Eco-Laboratory, which won the national USGBC 2008 Natural Talent Design Competition, and was included in the Cooper Hewitt Smithsonian Design Museum 2010 Design Triennial Exhibit.

Myer received the AIA Young Architects Award in 2021. He was also named a 2011 AIA Seattle Young Architect, and currently serves on the AIA Seattle board of directors. Nationally, Myer was active in the USGBC Greenbuild Program Working Group and Education Events Committee, and sat on the Board of Directors for Cascadia Green Building Council. He has co-instructed undergraduate and graduate architecture studios at the University of Washington, and has been a frequent studio critic. Myer received a Bachelor of Science in Architecture with Philosophy citation at the University of Maryland in 2002, a Master in Architecture at the University of Washington in 2005 and completed the UW Commercial Real Estate Certificate in 2016.