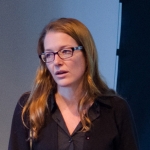 Ariane Lourie Harrison, PhD, AIA, is a Principal and co-founder of Harrison Atelier, a registered architect in New York, and coordinator in Architecture and Urban Design at the GAUD, Pratt Institute. She was a critic at the Yale School of Architecture from 2006 to 2017. Her projects and writing center on building for multiple species, from her anthology, Architectural Theories of the Environment: Posthuman Territory (Routledge, 2013) to Feral Architecture, in Aesthetics Equals Politics (MIT Press, 2019). She earned her PhD from the Institute of Fine Arts, New York University; her MArch from GSAPP Columbia University; and her AB from Princeton University