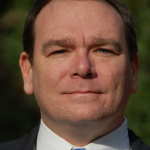 Bill is a graduate of LSU and an architect (Colorado, Alabama, Louisiana & Georgia Licenses) specializing in facility access compliance. He began working in this area of expertise while at Evan Terry Associates, Inc. just after the ADA was passed in 1990. He has extensive experience in ADA and Fair Housing Act litigation and since 1994 has been one of a handful of architect expert witnesses retained on behalf of the US Department of Justice in ADA and FHA investigations and law suits. He was a defense expert for the California Department of Transportation and the City and County of Honolulu in major ADA curb ramp litigation and testified for the defense at the 2011 ADA trial against the City and County of San Francisco. He was a member of the US Access Board's Public Rights-of-Way Accessibility Advisory Committee and consults extensively on facility compliance issues around the nation.

For many years he as been an Instructor in the Office of Executive Education at Harvard University's Graduate School of Design conducting workshops alongside Jim Terry, AIA on ADA and Fair Housing Act issues during summer sessions.