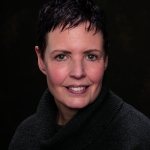 Ann Holtzman is the Zoning Officer & Flood Plain Administrator for the City of Hoboken, NJ. She became a Certified Zoning Official in 2009 through Rutgers Center for Government Services and was hired by the City of Hoboken in 2010 to serve in that capacity. Ann played an integral role in the city’s recovery after Hurricane Sandy and has been an active participant in the City’s strategic planning and implementation of Rebuild by Design. In 2013 she became an ASFPM Certified Floodplain Manager and added that to her professional responsibility for the City of Hoboken.