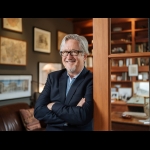 Michael is the principal architect of Michael G. Imber Architects, PLLC, a modern classical design firm based in San Antonio, Texas, recognized for a body of work that is strong in historic sentiment yet modern in its execution.

Michael has been honored with numerous local and national design awards, notably being honored with the lifetime Arthur Ross Award for his enduring commitment to the classical tradition in residential architecture, civic buildings and neighborhood design. He was inducted into the American Institute of Architects’ College of Fellows for his contribution to American design as well as being honored with the Texas Society of Architects’ William W. Caudill, FAIA award for his achievements as a young architect and for his contributions to the American Institute of Architects. He has won four National Palladio Awards for Outstanding Achievement in Traditional Design as well as numerous Texas ICA&A Staub Awards and AIA Awards.

Michael is equally known for his idyllic ranch and country houses throughout Texas and the United States and for his coastal residences and luxury resorts around the world, receiving much recognition for their sensitivity to culture, landscape, material, and craft. He was named “Master of the House” by Southern Accents Magazine and was the designer of the 2009 “Idea House” in Galveston, Texas for Coastal Living Magazine, as well as the 2011 “Idea House” for Southern Living Magazine.