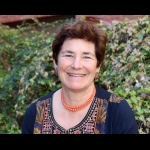 Katharine Jacobs is a professor of Environmental Science at the University of Arizona and Director of the Center for Climate Adaptation Science and Solutions, which builds adaptation and assessment capacity at multiple scales. From 2010 – 2013, Jacobs worked in the Office of Science and Technology Policy in the White House. She was director of the Third National Climate Assessment, and the lead advisor on water science, policy, and adaptation. From 2006-2009 Jacobs was Executive Director of the Arizona Water Institute, a consortium of Arizona’s three universities focused on water sustainability. She worked 23 years for the Arizona Department of Water Resources, including 15 as the director of the Tucson Active Management Area. She led the development of Arizona’s conservation programs and Assured Water Supply Rules. Jacobs earned her M.L.A. in environmental planning from Berkeley.