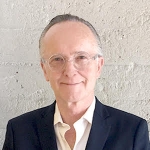 Joining Pereira Associates in Los Angeles in 1983 as Principal and Design Director, he and William Fain acquired the firm now known as Johnson Fain in 1988. In addition to designing nearly 100 built projects in the past 20 years, Johnson has also taught and lectured at various universities. He served as Director of the Master of Architecture Programs at the University of Southern California’s School of Architecture from 2004 through 2007. He is the author of the recent Essays on the Tall Building and the City, as well as Performative Skyscraper Tall Building Design Now, The Big Idea: Criticality and Practice in Contemporary Architecture, Tall Building: Imagining the Skyscraper, as well as Tectonics of Place: The Architecture of Johnson Fain.