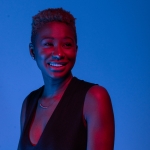 Samantha Josaphat is an Architect and the founder of Studio 397 Architecture. Part of a  mere 0.3% of Architects, she founded her Architecture and design firm and named it STUDIO 397 after her accomplishment of becoming the 397th African American female architect achieving licensure in the USA. Samantha is also a design studio adjunct professor at The Bernard and Anne Spitzer School of Architecture and President of The New York Chapter of The National Organization of Minority Architects (nycoba|NOMA). In 2020 Josaphat received the Tribune Award from the Beverly Willis Architecture Foundation for her commitment to advancing women in the building profession. In 2019 she was appointed to the Penn State Architecture Alumni Board and received a proclamation from New York City's Public Advocate for nycoba|NOMA, where she led her chapter in a multiple record breaking National conference. In 2018,Josaphat was awarded the 9th Annual Women in Architecture from AIANY, had her work exhibited at the United Nations visitors center, and was a finalist in the Times Square Valentine Heart Design Competition. Josaphat's work and research has been featured in several media coverages including Architectural Digest (What to look for in a business partner), The Wall Street Journal ("MTA Vendors Mull Ending Contracts asAuthority Seeks 10% Cuts,"), NOW THIS, Sag Harbor Express ("SANS is Sag Harbor's Newest New York State Historic Landmark"), Dwell ("9 Brilliant Black Designers and Architects You Should Know"), and MindMagazine ("Trail Blazin': An Interview with STUDIO 397's Samantha Josaphat").