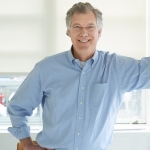 Thomas A. Kligerman was raised on the East Coast and New Mexico. He received his Bachelor of Arts from Columbia University and his Master of Architecture from Yale School of Architecture. Tom worked for Robert A. M. Stern Architects before co-founding Ike Kligerman Barkley in 1989. He is passionate about architectural history and the design process: from sketches and watercolor renderings to 3D models and virtual reality. Tom travels extensively and has spent time abroad, in France and England as a student and more recently at The American Academy in Rome. In his free time, he enjoys water coloring, reading design books, and spending time with family on the coast of Rhode Island.

Tom serves on the boards of several charitable and educational institutions, include Lutyens Trust America and Billion Oyster Project. He was the 2019 recipient of the Design Leadership Award.

His work has been featured in renowned design magazines such as Architectural Digest, LUXE Magazine, Elle Decor and Veranda. His firm, Ike Kligerman Barkley, has been recognized on the AD100 and Luxe Gold lists.