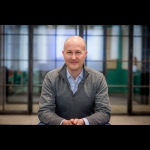 Jed will share recent research on migration patterns during the pandemic, which largely followed pre-existing trends with the addition of moves out of a few large cities. Most moves were short distance. Even if a sustained increase in remote work makes these migration patterns permanent, it will not mean the death of distance or the end of location. Rather, cities will spread out, as people who commute occasionally will be willing to commute longer distances. Downtowns might suffer from a permanent increase in remote work -- especially office-adjacent local businesses and public services that see patronage decline.