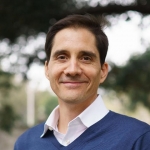 For the last seven years, Scott Kratz has been working with the Ward 8 non-profit Building Bridges Across the River and District agencies to transform an old freeway bridge into a park above the Anacostia River. The old 11th Street Bridges that connect Capitol Hill with communities east of the river have reached the end of their lifespan, Kratz is working with the community to use the base of one of the bridges to create a one of a kind civic space supporting active recreation, environmental education and the arts.

Kratz is a resident of Barrack’s Row and has lived in Washington D.C. for the last 14+ years. He has worked in the education field for over twenty years and began his career teaching at Kidspace, a children’s museum in Pasadena, California and later as the Associate Director of the Institute for the Study of the American West at the Autry National Center in Los Angeles, CA. While at the Autry, he supervised a staff that planned and implemented programs including theater, film, music, festivals, family programs, lecture series, and academic symposia. Most recently, he was the Vice President for Education at the National Building Museum in Washington D.C. He serves on the board of the United Planning Organization and the Anacostia Coordinating Council.