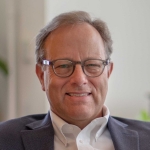 Principal and Director of Strategy, Academic and Child Health and Wellness

Scot Latimer, of Gensler, is among the North America’s best-known and most soughtafter healthcare strategists. His area of consulting emphasis is the deployment of resources to create health systems – hospital and physician networks – which deliver on the promise of population health in terms of access and efficiency. He is best known for his work with large, integrated organizations including academic medical centers and children’s hospitals. Scot has led major consulting practices and joined Gensler’s Health and Wellness practice in 2018 to partner his strategic and business planning expertise with the power of Gensler’s design work. He firmly believes that the future environment will require greater access to specialist knowledge and tolerate less of the overhead and inefficiency inherent in large firm consulting. He works directly with health systems on matters of importance and, when called-for, to form networks with other experts offering greater agility and advantage to client organizations. Scot has conducted peer-reviewed research in the area of health facility planning, has spoken on a range of planning topics in dozens of venues, and has been quoted in major media including the New York Times, The Wall Street Journal, The Economist, Fast Company and National Public Radio.