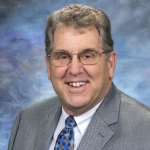 Bill has been certified as a Cal OES SAP volunteer since 1993. He deployed to Northridge after their Earthquake and to New Orleans in response to Hurricanes Katrina & Rita. He led his firms’ team in their efforts to quickly reopen Sierra Sands Unified School District schools after the 2019 Ridgecrest Earthquake.

Bill is licensed as an Architect in Nevada, 1742 and California, C-16835.  He is a graduate of California Polytechnic State University, San Luis Obispo, BArch 1976 and holds LEED® AP and NCARB certifications.