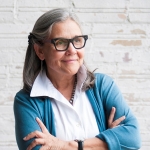 Cheryl is a licensed architect and Emerita Professor of Architecture who was the Director of Auburn University’s Urban Studio in Birmingham, Alabama. Under Cheryl’s leadership, the Urban Studio’s Small-Town Design Initiative Program worked with over 75 small towns and neighborhoods in Alabama.

Morgan practiced architecture and urban design in the San Francisco Bay Area before coming to Auburn in 1992. Morgan’s professional practice now focuses on urban design, community revitalization and graphic design. She is also an experienced facilitator.

In 2012 she received one of Auburn University’s highest awards for Achievement in Outreach and in 2017 the Alabama State Council on the Arts named Cheryl one of the recipients of their bi-annual Governor’s Award. In 2018 she gave a TEDx talk at TEDx Birmingham titled “Place Matters.”

She is a Fellow of the American Institute of Architects.