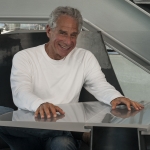 Eric Owen Moss Architects was founded in 1973. The Culver City-based office has completed projects in the United States and around the world. There are 22 published monographs on the work of the office, and EOMA projects have garnered over 140 local, national, and international design awards. Moss has received numerous prestigious honors including: Academy Award in Architecture from the American Academy of Arts and Letters, 1999; AIA|LA Gold Medal, 2001; Distinguished Alumni Award from the University of California, Berkeley, 2003; Arnold W. Brunner Memorial Prize, recognizing a distinguished history of architectural design, 2007; Jencks Award by the Royal Institute of British Architects, 2011; National Academy induction, 2014; Austrian Decoration of Honor for Science and Art from the Austrian President during a ceremony at Hofburg Palace, 2016; Beidou Master Award in Ordos, China, 2017; Arpafil Award in Guadalajara, 2019.

Time Magazine listed Vespertine as one of the World’s Greatest Places to Visit in 2018, and in 2020 Conjunctive Points – The New City was awarded the AIA Twenty-five Year Award. Per the AIA, “the Twenty-five Year Award showcases buildings that set a precedent. The award is conferred on a building that has stood the test of time for 25-35 years and continues to set standards of excellence for its architectural design and significance.” Moss has held teaching positions at major universities around the world including Harvard, Yale, Columbia, University of Applied Arts in Vienna, and the Royal Academy in Copenhagen. He has been a longtime professor at the Southern California Institute of Architecture (SCI-Arc), and served as its director from 2002-2015. He received the Most Admired Educator Award from the Design Futures Council in 2013, and The AIA|LA Educator of the Year in 2006.