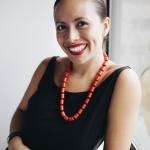 Paola Moya joined a partnership with Michael Marshall in 2010 to form Marshall Moya Design. She now manages executive responsibilities and strategic planning, and is actively involved in the design, development, and successful completion of each of the firm’s projects. Prior to forming the partnership, Moya worked for three years with Marshall at his firm, Michael Marshall Architecture. Moya also worked for six years at Georgetown Design Group in Washington, D.C.

In 2016, Moya and Marshall were named to Washington Business Journal's "Power 100" Playmakers list. In 2015, Moya was named a "40 Under 40" honoree by the Washington Business Journal and a “Minority Business Leader” of the year in 2014. In 2013 she was honored as “Young Entrepreneur of the Year” by the DC Chamber of Commerce, the 2013 “Rising Star” by the Greater Washington Hispanic Chamber of Commerce, and one of MEA Magazine's “25 Influential Women in Business.”

Moya graduated from the 2014 Urban Land Institute (ULI) Leadership Class and the 2015 Leadership Montgomery Core Program. She is also a part of the 2015 Emerging Leaders program by the U.S. Small Business Administration. Her work has been recognized with international, national, and local design excellence awards. Moya serves on the boards of a number of influential organizations, including DCBIA and the Montgomery Housing Partnership, as well as the advisory board of Catholic University's graduate Architectural Real Estate program. She earned a Finance certification from the Wharton School of the University of Pennsylvania’s Executive Education program. She earned a MA in Architecture with a Real Estate Development concentration, and a BS in Architecture from The Catholic University of America.