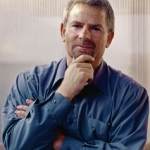 LOHA founder and principal Lorcan O’Herlihy seeks opportunities to engage the ever changing complexities of the city landscape, embracing the role of architecture as a catalyst of change.

Since LOHA’s inception in 1990, these urban and social concerns have been paired with an interest in artistry. Lorcan spent his formative years working in New York and Paris on the Grand Louvre Museum as a designer at IM Pei Partners. The project, in which the harmonious coupling of art and architecture was paramount, instilled a passion toward aesthetic improvisation and composition which eventually found its way into Lorcan’s own work. Lorcan has also worked as a painter, sculptor, and furniture maker. The methodologies of material exploration and formal inflection, derived from the looseness of abstract art, have played a significant role across all media and are a critical driver of his architecture.

In 2004, the Architectural League of New York selected Lorcan O’Herlihy as one of the eight “emerging voices” in the United States. In 2009, Lorcan was elevated to the prestigious College of Fellows of the American Institute of Architects. He has taught and lectured extensively over the last decade, including at the Architectural Association in London, Southern California Institute of Architecture [SCI-Arc], Cranbrook Academy of Art, Michigan, Columbia University, Pratt Institute, University of Southern California, and the National Building Museum, Washington D.C.