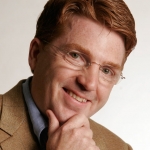 Kelly O’Keefe is a professor and founding board member of the VCU Brandcenter. O’Keefe has advised brands like KitchenAid, Carmax, the Colombian Coffee Federation, GE, ESPN, Capital One, Sesame Street, UPS and Walmart. In addition to O’Keefe’s corporate work, he has advised dozens of non-profit organizations, Universities and community programs. O’Keefe is a board member of the Future of Advertising Project at the Wharton School of Business.

He is a noted speaker, commentator and author on creativity and innovation. He has been inducted into the Virginia Communications Hall of Fame and named Richmond Ad Person of the Year, Virginia Entrepreneur of the Year, and Adweek named his firm Southeast Agency of the Year. O’Keefe has been a keynote speaker on branding at business conferences across the globe. His commentary has been featured in dozens of media outlets, including CNN, Fox News, MSNBC, PBS, The New York Times, The Wall Street Journal, USA Today, Forbes, Fast Company, BusinessWeek, Time, The Washington Post and the Los Angeles Times.