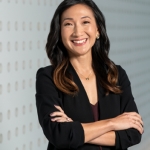 Jennifer Park joined Brininstool + Lynch as Principal in 2019. She has an undergraduate degree in architecture and art history from Columbia University and a graduate architecture degree from the University of California at Los Angeles. Park has taught at the School of the Art Institute of Chicago, Virginia Commonwealth University, and continues as a Studio Assistant Professor and Coordinator of Second Year Studio at the Illinois Institute of Technology.

Previously the Founder and Principal of Jurassic Studio, Park has completed acclaimed academic, commercial, residential, and retail projects through practices in New York, Los Angeles, Mexico City, and Chicago. Her design explorations query the relevance of patterns, ornamentation and composition in contemporary architecture. Notable work includes museum design and community outreach for the Obama Presidential Center Museum, a parametrically generated metal facade for the Gateway Plaza parking garage, an animated ceiling design for a corporate interior at 35 E Wacker, offices for Cushman & Wakefield, and a showroom for Artemide.

Park is recognized as a 2021 recipient of the AIA National Young Architects Award. Previously, she was the winner of the 2019 Dubin Family Young Architect Award and was the recipient of the 2015 Burnham Prize from the Chicago Architectural Club. She was named one of Chicago's Women of Influence by Michigan Avenue magazine and a finalist for the Curbed Young Guns Award that same year. In addition, Park previously served on AIA Chicago’s board of directors for the past five years as the Vice President of Honors and Awards. She is Co-chair of the Diversity and Inclusion Committee at IIT College of Architecture and is one of the founding members of AIA Chicago’s Equity, Diversity, and Inclusion Committee where she served as Co-chair for four years.