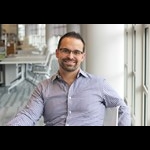 Jon Penndorf, FAIA, is a Senior Associate in the Washington, DC office of Perkins+Will, where he serves as Sustainability Leader and Project Manager. A member of the AIA Committee on the Environment (COTE) Advisory Group and regional representative to the AIA Strategic Council, he works to push the Institute and its members forward on the topic of resilience. He has authored research on the topic and serves on the firm-wide Perkins+Will Resilience Task Force. Growing up just outside of New York City, Jon and his family had a membership to the Bronx Zoo. His parents really loved animals and were fond of conservancy. Every couple of months the family would visit the zoo and after several visits, Jon stopped looking at the animals and instead started paying attention to their habitats and the buildings in which they live. He started to think about the buildings and conservancy and how the marriage of the two could have a positive impact on the animals and the people visiting them. That is when his interest in architecture began, specifically sustainable architecture. In addition to his role as senior associate and senior project manager, Jon is also the Green Team leader for the office. He describes himself as the biggest proponent against climate change and an advocate for climate adaptation and resilience. As a guest speaker at national conferences such as the American Institute of Architects, the Greenbuild International Conference, and CoreNet, Jon has shared his passion and thought leadership on sustainability and how architects and designers can help combat climate change. He has also been featured in the Washington Post, Washington Business Journal and National Geographic online.