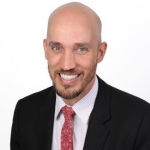 Joel Peterson is Director of Human Resources for a professional design firm in New York City. Joel began his career as an actor before transitioning into Human Resources. His diverse background spans a variety of industries ranging from international education, the pharmaceutical industry, and public television. For the last nine years, Joel has worked at Goshow Architects where he helps build the people who build the buildings.