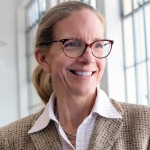 Elizabeth Plater-Zyberk is a founding principal of DPZ Partners, and the Malcolm Matheson Distinguished Professor of Architecture at the University of Miami where she directs the Master in Urban Design Program, after 18 years as dean of the School of Architecture.

Plater-Zyberk is a founder of the Congress for the New Urbanism, an organization established in 1993 to promote walkable, resilient urban design. She is co-author of Suburban Nation: The Rise of Sprawl and the Decline of the American Dream and The New Civic Art: Elements of Town Planning.

At DPZ, Plater-Zyberk leads and manages projects ranging from individual building design to new community design, community rebuilding, regional plans and zoning codes--including Miami 21, a form-based code for the City of Miami, approved in 2010 and currently in use. Her work with partner Andres Duany, has been widely recognized by awards such as the Richard H. Driehaus Prize for Classical Architecture and the APA National Planning Excellence Award for Best Practice for Miami 21.

With degrees from Princeton University and the Yale School of Architecture, Plater-Zyberk lectures frequently and has been a visiting professor at a number of universities in the United States.