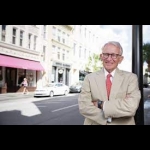 Joe Riley is widely considered one of the most visionary and highly effective governmental leaders in America.  He served ten terms as Mayor of the City of Charleston from 1975 to 2016.  He is known for his innovative redevelopment projects, carefully crafted to add to the overall quality of life in the city.

Today, Riley is professor of American Government and Public Policy at The Citadel and Executive in Residence at the Joseph P. Riley, Jr. Center for Livable Communities at the College of Charleston. Riley has held numerous national leadership positions and received many awards and distinctions including the 2009 National Medal of the Arts as the founder of the Mayors’ Institute on City Design. Additional distinctions include the U.S. Conference of Mayors President’s Award, the Urban Land Institute’s Prize for Visionaries in Urban Development, the Arthur J. Clement Award in Race Relations, the Thomas Jefferson Award, the Seaside Prize from the Seaside Institute, and the Outstanding Mayors Award from the National Urban Coalition. He served as President of the U.S. Conference of Mayors in 1986-87 and has received honorary degrees from ten colleges and universities. The American Architectural Foundation and the U.S. Conference of Mayors in 2010 created the Joseph P. Riley, Jr. Award for Leadership in City Design in his honor.