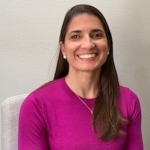 Principal at I Design Access, LLC and international architectural designer consultant for major infrastructure projects with a focus on inclusive design. Ileana's experience comes from working for clients such as the International Paralympic Committee, national sports organizations and a variety of architecture firms. Ileana has been involved as a consultant to oversee different sizes of projects from Olympic/Paralympic Stadiums and airports to smaller sports facilities, hotels and temporary infrastructure. The projects have taken place in Europe, Asia and The Americas. Ileana Rodriguez is a Paralympic swimmer and former member of the USA Team for the London 2012 Games.

Ileana has been a board member of the Americas Paralympic Committee as the Athlete Representative for the region for the past seven years. Currently, Ileana has joined the LA28 Athlete Commision in preparation for the Olympic and Paralympic Games.  Ilena has been invited as  a keynote speaker in several conferences, universities and interviews on different media outlets on issues related to inclusion, architecture and sport.