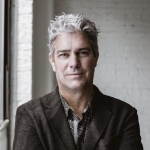 John Ronan is founding principal of John Ronan Architects and is currently Professor of Architecture at the Illinois Institute of Technology College of Architecture, where he has taught since 1992.  John has lectured widely, and his work has been exhibited internationally, including the Art Institute of Chicago and The Architectural League of New York’s Urban Center. His work has been included in numerous publications on design and covered extensively by the international design press. A monograph on his work, entitled Explorations, published by Princeton Architectural Press was released in 2010. His firm has been the recipient of two AIA Institute National Honor Awards (for the Poetry Foundation and The Gary Comer Youth Center, both in Chicago). He is a Fellow of the American Institute of Architects and a recipient of the American Academy of Arts and Letters Architecture Award.