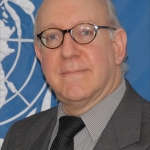 Mr. Alex Ross is Director of the WHO Centre for Health Development in Kobe, Japan (WKC), a global centre for excellence for research into a variety of determinants that contribute to health and development. WKC leads research on urbanization and health, emphasizing measurement of inequities, and development of practical approaches to intersectoral action for health. An expert in public health policy and health systems, Mr. Ross has developed domestic and global health policies, programmes, initiatives, and innovative financing mechanisms over the past 25 years. These have focused on health systems, communicable and noncommunicable diseases, prevention programmes, ageing populations, as well as significant contributions to developing the Global Fund to Fight AIDS, TB and Malaria; UNITAID; and the "3x5" initiative.

Prior to his current role, Mr. Ross was Director for Partnerships and UN Reform at WHO Headquarters (Geneva), and held senior posts as Director in the Office of the Assistant Director-Generals for Communicable Diseases and for HIV/AIDS, TB and Malaria. Before joining WHO, Mr Ross served in senior domestic and international health positions for the UK Department for International Development (2001-2003), and in several U.S. Government agencies between 1987 and 2001.

Mr. Ross holds a B.S.P.H. and M.S.P.H. degrees from the University of California, Los Angeles (UCLA) School of Public Health, and has conducted doctoral level studies in public health at the Rand Graduate Institute.