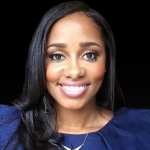 Founder and Executive Director | Beyond the Built Environment

Pascale Sablan, FAIA, is the Founder and Executive Director of Beyond the Built Environment, LLC, positioned to uniquely address the inequitable disparities in architecture by providing a holistic platform aimed to support numerous stages of the architecture pipeline.

To impact the culture, Beyond the Built Environment, elevates the identities and contributions of women and diverse designers through exhibitions, curated lectures, and documentaries that testify to the provided value of their built work and its spatial impact. Pascale curated SAY IT LOUD exhibitions at the AIA New York, in Center for Architecture Gallery, SXSW Conference 2019, A'19, and NOMA 2018 Unbounded conference which was all paired with relevant programming speaking to the mission. The SAY IT LOUD - United Nations Visitors Centre, exhibition created a tremendous opportunity for exposure and echoing the call to action to the leaders of our world. After her speech at the opening of our exhibition, the United Nations generously offered to transform this exhibition into posters, translated into 8 languages (English, French, Spanish, Portuguese, Chinese, Russian, Arabic, and Kiswahili), and distributed to their information centers worldwide. SAY IT LOUD - United Nations exhibit has been displayed in Bujumbura, Geneva, Harare, Lagos, Lome, Nairobi, New Delhi, Minsk, and Yaounde.

She has been recognized for her contributions to the industry with several awards, including the 2021 AIA Whitney M. Young. Jr Award for her advocacy efforts and ascended to the AIA College of Fellows, the youngest African American to receive that honor. She was featured in the Council of Tall Building & Urban Habitat Research Paper, in the same company as Jeanne Gang and Zaha Hadid.

Pascale is the AIA New York Board of Directors and NOMA National Historian. In 2020 Pascale was voted President-Elect of the National Organization of Minority Architects, the 5th woman to hold this position of leadership in the organization's 50-year legacy.

Mrs. Sablan holds a Bachelor of Architecture from Pratt Institute and a Master of Science in Advanced Architectural Design from Columbia University.