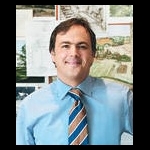 Gil Schafer is an architect and historic preservationist specializing in traditional residential design, carrying on a family tradition of service in the architecture profession. Having worked in several notable classical architecture firms after receiving a Masters of Architecture from Yale (following undergraduate studies at Haverford and Bryn Mawr Colleges), Gil established his own practice, G. P. Schafer Architect, PLLC, in New York City in 2002. The firm has since undertaken projects all across the country, and its work has been widely published in the U.S. and abroad. Gil’s first book, The Great American House, was published by Rizzoli in October of 2012 and is already in its fourth printing. He also lectures around the country on the continued relevance of classical residential design.

In addition to his architectural work, Gil serves on several non-profit advisory and trustee boards including the Yale School of Architecture Dean’s Council and the board of the Thomas Jefferson Foundation at Monticello. From 1999-2006 Gil served as President and then Chairman of the Board of the Institute of Classical Architecture & Art, the nation’s leading resource for the classical tradition in architecture and the allied arts.