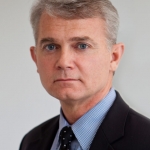 Leslie Shepherd, FAIA Chief Architect General Services Administration Les Shepherd was named Chief Architect for the U.S. General Services Administration in November 2006. Prior to this position, he served as the Director of Federal Buildings and Modernization with the Office of the Chief Architect. As Chief Architect, Shepherd is the Senior Advisor to the Administrator of GSA and to the Commissioner of the Public Buildings Service (PBS) regarding federal architecture and design policy and innovation. Current design and construction work in progress consist of more than 110 projects with a value of more than $7 billion executed by 11 GSA regional offices.

Shepherd is a licensed architect and a LEED Accredited Professional. In 2010, the American Institute of Architects (AIA) selected him to receive the prestigious Thomas Jefferson Award. The Thomas Jefferson Award recognizes excellence in architectural advocacy and achievement in Public Architecture. Shepherd received his professional degree in architecture from Texas Tech University. In 2010 he received the Texas Tech Distinguished Alumni award and in 2011 he was awarded the Texas Tech School of Architecture Distinguished Alumni Award. Additionally in 2012 he was inducted into the American Institute of Architects, College of Fellows.