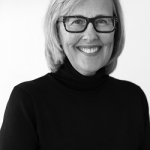 Julie Snow has garnered national recognition as both a practitioner and academic. Since founding Julie Snow Architects in 1995 and continuing the design trajectory of the firm as Snow Kreilich Architects, Julie participates in every project in the studio.

Julie has taught architecture at the Graduate School of Design at Harvard, the University of Southern California, and the University of Minnesota College of Design, where she received the Ralph Rapson Award for Distinguished Teaching. Julie’s design leadership is also evidenced by her participation on juries and delivery of lectures in both academic and professional settings. She has lectured at the Walker Art Center, the San Francisco Museum of Modern Art and the National Building Museum, as well as making keynote addresses at several AIA conferences across the country.