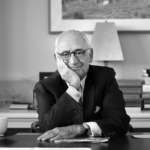 Robert A.M. Stern is a practicing architect, teacher, and writer, Founder and Senior Principal at Robert A.M. Stern Architects. He is a Fellow of the American Institute of Architects, and received the AIA New York Chapter's Medal of Honor in 1984 and the Chapter's President's Award in 2001. Mr. Stern is the 2011 Driehaus Prize laureate and in 2008 received the tenth Vincent Scully Prize from the National Building Museum. In 2007, he received both the Athena Award from the Congress for the New Urbanism and the Board of Directors' Honor from the Institute of Classical Architecture and Classical America. As founder and Senior Partner of Robert A.M. Stern Architects, he personally directs the design of each of the firm's projects. Currently, he is the J.M. Hoppin Professor of Architecture and Dean of the Yale School of Architecture. He was previously Professor of Architecture and Director of the Historic Preservation Program at the Graduate School of Architecture, Planning, and Preservation at Columbia University.

Mr. Stern has lectured extensively in the United States and abroad on both historical and contemporary topics in architecture. He is the author of many books, and his profound interest in the development of New York City's architecture and urbanism can be seen in his books on the subject including : New York 1930 (Rizzoli, 1987) coauthored with Thomas Mellins and Gregory Gilmartin, which was nominated for a National Book Award, an unusual distinction for a book about architecture. Paradise Planned: The Garden Suburb and the Modern City (Monacelli, 2013), coauthored with David Fishman and Jacob Tilove, was published in 2013. Seventeen books on Mr. Stern's work have been published.

Mr. Stern's work has been exhibited at numerous galleries and universities and is in the permanent collections of the Museum of Modern Art, the Metropolitan Museum of Art, the Deutsches Architekturmuseum, Centre Pompidou, the Denver Museum of Art, and the Art Institute of Chicago. In 1976, 1980, and 1996, he was among the architects selected to represent the United States at the Venice Biennale, and he served as Chair of the International Jury in 2012. Mr. Stern is a graduate of Columbia University (B.A., 1960) and Yale University (M. Architecture, 1965).

Please confirm the information below before signing in.

Thank you for registering!

We have sent a confirmation email to {* emailAddressData *}. Please check your email and click on the link to activate your account.

We'll send you a link to create a new password.

We've sent an email with instructions to create a new password. Your existing password has not been changed.

Your email has not been verified.