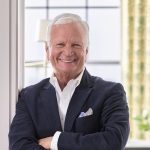 JAMES L. STRICKLAND, YALE ALUMNUS, FOUNDED HISTORICAL CONCEPTS IN 1982 with a commitment to creating timeless homes inspired by historic precedent and informed by the grace and charm of the South. At an early age, Jim took notice of the often-overlooked details that make up the story of a home and embraced the artistry of fine builders. The role of indigenous materials in expressing the language of a community, as well as the little quirks that belong to a particular region, taught him that vernacular precedent was inextricably linked to the work of craftsman through their honest expressions of material and form. In these less explored building styles and types, Jim saw his future: to re-invent them for contemporary living while preserving their traditional spirit and delightful idiosyncrasies.

His professional career began with real estate development in Florida. Later, having moved back home to Georgia, he launched a design/build firm and began creating homes like those that had enchanted him as a boy, constructing over 200 traditionally inspired homes in the metro-Atlanta region. At the same time, his passion for America’s Greco-Roman architectural heritage stronger than ever, he published The Savannah Tidewater Series, a collection of plans based upon the historic homes that had so influenced his design sensibilities. The popularity of these plans, previously unavailable in the high-end market, uncovered an abundant well of kindred spirits. This discovery was the spark that emboldened Jim to focus solely on architecture and design. In the two decades since that time and under Jim’s guidance, Historical Concepts has evolved into an award-winning architecture and planning firm dedicated to creating homes and communities that have all the beauty and character found in America’s most beloved towns and villages.

After leaving the University of Georgia and before his studies at Yale’s Graduate School of Architecture, Jim served in the United States Army Special Forces as a Green Beret stationed in West Germany along the Iron Curtain. Jim’s simultaneous ability to act with humility while leading by example has formed an elemental aspect of his design philosophy. His keen sense of teamwork recognizes that the best ideas come from an open forum.

In sharing his knowledge and experience with young students, Jim is proud to have taught at the Georgia Institute of Technology and to have served as a guest critic at the Universities of Miami and Notre Dame. In addition to the firm’s many awards and publications, Jim was personally recognized by Southern Accents in their inaugural “Masters of the House” feature, showcasing architects, designers, and builders who honor the South’s architectural legacy.