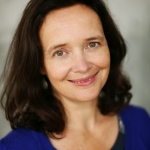 Amanda Sturgeon, FAIA is CEO of the International Living Future Institute, home of the Living Building Challenge. She is an award-winning architect in the Pacific Northwest where she has practiced since 1998. Her projects include pioneering green building projects such as Islandwood on Bainbridge Island, Washington. Amanda was a founding board member of the Cascadia Green Building Council in 2000-2002 and was instrumental in passing the first State LEED legislation in Washington State in 2003.

She has served on many boards and committees and has taught at the University of Washington as well as Bainbridge Graduate Institute. She lectures widely with a focus on Biophilia as a pathway to a restorative future. Amanda was elected as a Fellow of the American Institute of Architects and made a LEED Fellow in 2013 in recognition of her pioneering commitment to advancing sustainability through advocacy, policy and practice.

Amanda was born in the UK, educated in Australia and now calls Bainbridge Island, Washington her home.